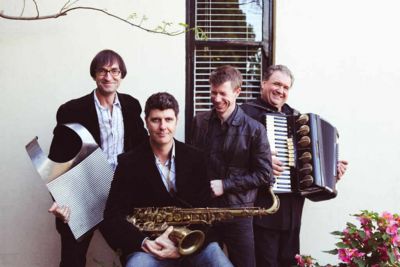 Sydney based Psycho Zydeco, or the Psychos as their fans affectionately dub them, have been one of the most successful Australian roots based bands for over 25 years now. With numerous tours, festivals and gigs throughout Australia and Europe, as well as four critically acclaimed albums, the band is enjoying performing live now more than ever.

The band has taken the stage with Zydeco legends Rockin’ Dopsie and Terrance Simien in the past. Both of these giants of the deep south have praised the band for capturing a true Zydeco sound that has an Australian kick and flavour. This is something that we are very proud of.

The band’s earthy blend of traditional Cajun, Blues and Swamp music produce a sound that is Psycho Zydeco. Driving washboard, drums, guitar, sax and the odd industrial sized triangle, combine with some amazing accordion playing that will make you feel so good you will want to grab a washboard and get up on stage and start scraping with the boys.

Cajun and Zydeco music were spawned from the melting pot of cultures that is New Orleans and Louisiana. When French speaking Acadians were exiled from Canada in the 18th century, many settled in Louisiana alongside the local Native American Indians, African slaves and European colonists already living in the region. They became known as Cajuns and their folk music became influenced by the surrounding cultures. Originally the button squeeze-box, fiddle, whistles, triangle and washboard were used until a man by the name of Clifton Chenier in the 1940s strapped on a full size piano accordion and backed himself with a red hot blues band.